Livability indexes can obscure the experiences of non-white people. CityLab analyzed the outcomes just for black women, for a different kind of ranking.
By
Brentin Mock

Last September, the city of Pittsburgh released a report on gender and race disparities that concluded, perhaps to the city’s own shock, that Pittsburgh is the worst city for black women to live in by just about every metric. The aftermath of that bombshell was a bevy of columns and essays from black women either expressing vindication for leaving Pittsburgh or—for those still stuck there—questioning whether they should stay. Listing the many reactions to the report, local columnist Tereneh Idia wrote for Pittsburgh City Paper:

Then there was the “Should I stay or should I go?” battle among Black Pittsburghers. The shame of leaving, the pitying of those who want to stay. The “self-righteous” stay-camp, the “selfish” go-camp. The “self-preserving” go-camp and optimistic “we-built-this-city” stayers. Which also meant Black folks were arguing among ourselves (again) instead of looking at the systems, policies, and people responsible (again).

For the “should I go?” camp, there’s a question that also confronts many other American black women: Where exactly is a livable place for African-American women? To explore answers to this question, CityLab collaborated with one of the lead researchers of the Pittsburgh disparities report to look at a similar analysis across America’s largest cities. The result is a window into some of the best and worst cities for black women.

Of course, no ranking should obscure the fact that there is no city doing complete justice to black women’s lives. According to “The Status of Black Women in the United States” report, produced by The Institute for Women’s Policy Research, black women overall saw their median annual earnings decline by 5 percent between 2004 and 2014 despite the fact that the share of black women with at least a bachelor’s degree increased by 23.9 percent in that same time period. Today, black women earn roughly 61 cents for every dollar made by white men across the nation.

So the question of where black women move is often a matter of which city will fleece them the least. CityLab worked with urban sociologist Junia Howell to analyze where best metros for black women are located based on a ranked livability index. The index looks at inequities for black women in terms of income status, health conditions, and educational accomplishment. We also took the average values across all three of those categories to see how metros ranked for black women’s overall outcomes.

Unlike the initial research on Pittsburgh, this analysis looks at metropolitan areas rather than just the cities proper. We didn’t examine every urban metro in the U.S. given that population sizes could skew results—the effects might appear exaggerated in small metros with large numbers of black women, such as in some southern, rural places; or, where black women have tinier numbers in larger metros. Instead, we look at the 42 largest metropolitan areas with more than 100,000 black women residents for our rankings. 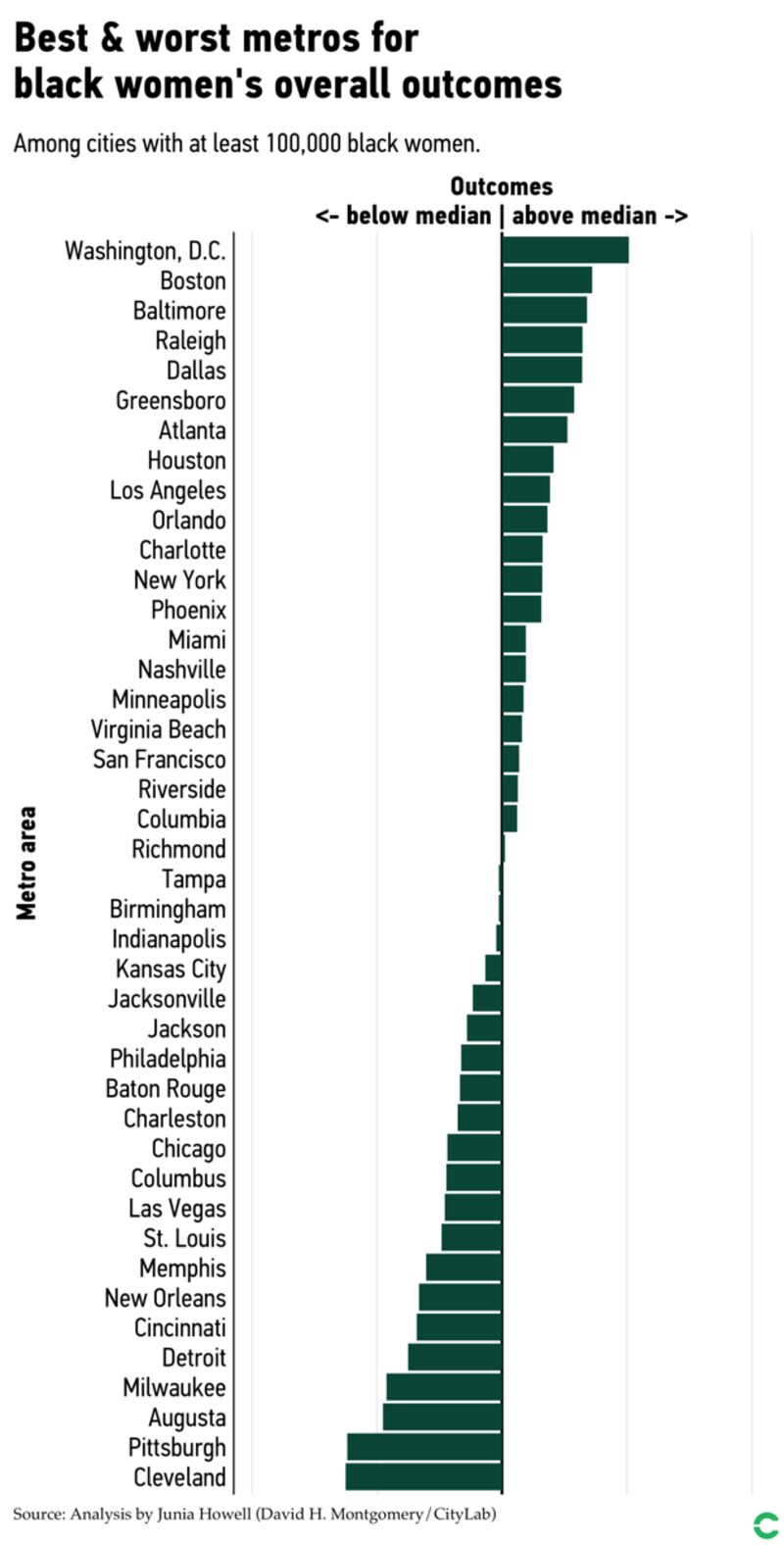 A few patterns emerge: First, as pictured in the chart above, black women’s livability experiences are generally worst in Midwestern cities. (And although Pittsburgh is not technically part of the Midwest, it has many traits common to the region.) Second, livability is generally best for black women in southern metros, from the Deep South, to several cities in North Carolina, to several metros closer to the Mason-Dixon line. And finally, while black women’s economic prospects are strongest in the D.C.-Maryland-Virginia (DMV) area, their health conditions—perhaps the most critical metric for livability—lag significantly there compared to other regions.

Looking across all criteria, the one metro that jumps out is Washington, D.C., which ranks above all metros in educational, economic, and overall outcomes, with its neighbor Baltimore following close behind in each of these categories. However, Baltimore ranks well below the median in health outcomes, a reflection of the city’s extraordinarily high rates of maternal and infant mortality, cancer, domestic violence, police violence, and poverty.

A recent public forum held at the Johns Hopkins Bloomberg School of Public Health examined how the unique health problems among Baltimore’s black women can be traced to the city’s long history of racial segregation and slavery—including the complicity of Johns Hopkins Hospital itself. 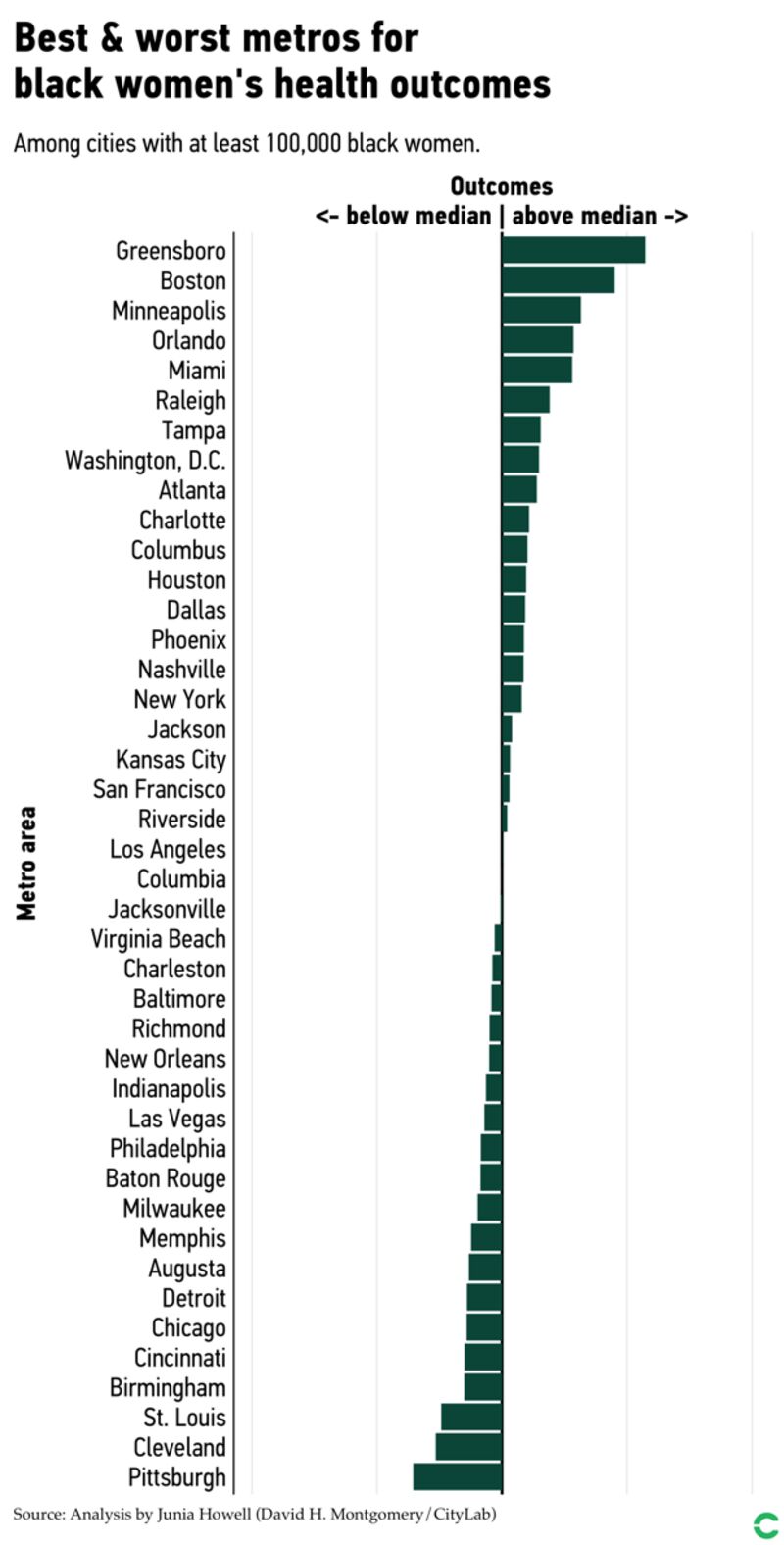 The otherwise-high rankings for D.C. and Baltimore makes sense given that both metros are home to numerous universities and hospitals, including John Hopkins, Howard, and George Washington, and have a strong concentration of military posts and public sector institutions. The public sector here is key: Government is the second-largest employer of black women overall (and the largest for black men), and the DMV region has the densest concentration of federal government jobs in the nation. Add in the local government workforce of these metros—D.C.’s mayor is a black woman and up until late last year Baltimore was led by black women dating back to 2007—and you have perhaps the largest community of public-employed black women in the country.

Yet no state is better represented among the top metros for black women’s overall outcomes than North Carolina, where Raleigh, Greensboro-High Point, and Charlotte-Concord-Gastonia come in at number 4, 6, and 11 respectively. While not huge outposts for government sector jobs, these metros are plentiful sources for jobs in the private sector and represent one of the top regions for African-American employment in general. They are also home to a vast number of higher education institutions—North Carolina is home to 12 historically black colleges and universities, tied with Alabama for most HBCUs in one state—spurring tech and innovation markets that have shaped the region for much of the 21st century. 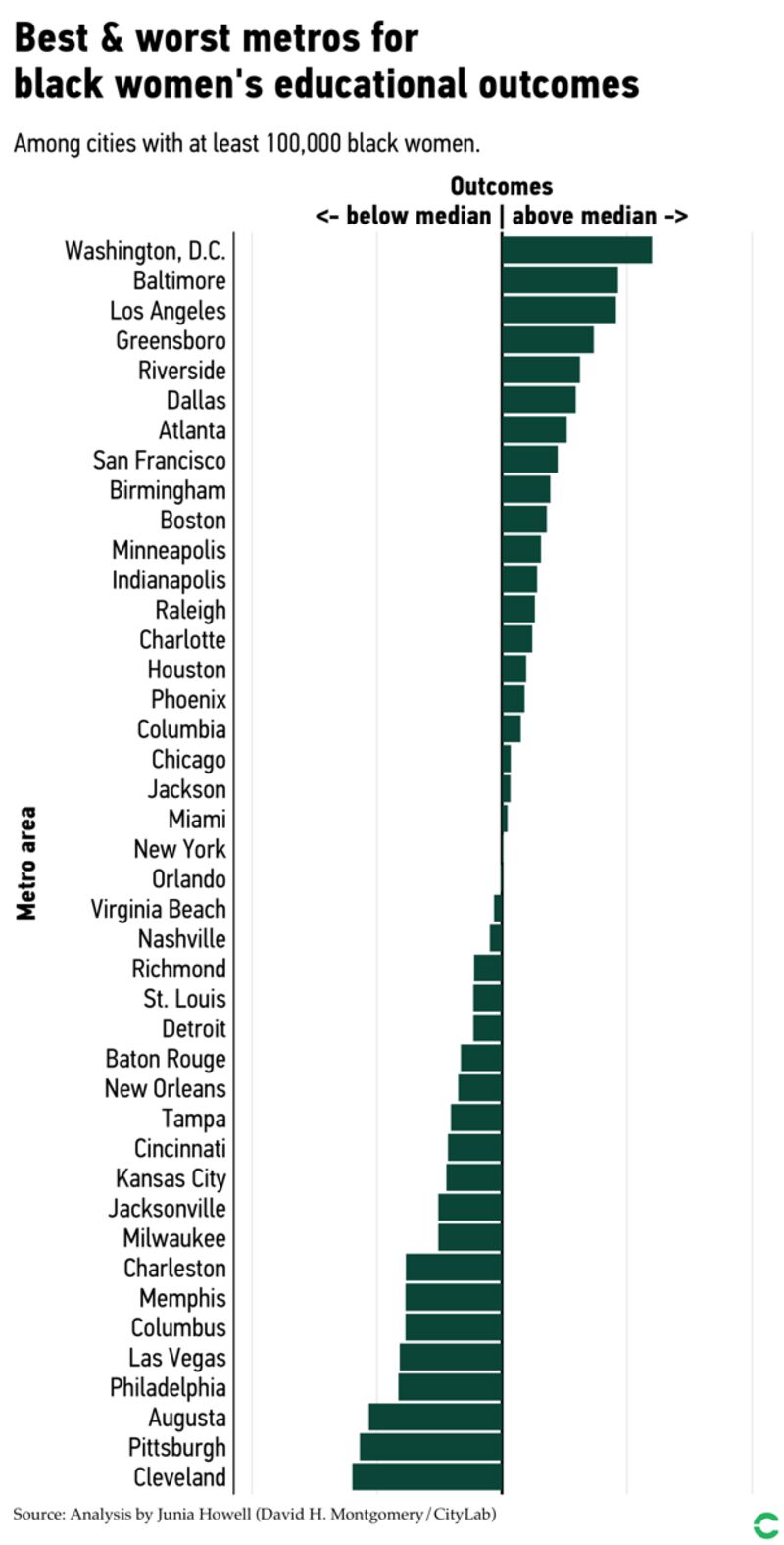 It can’t be stressed enough that these rankings don’t necessarily reflect the lived experiences of black women working, going to school, and just breathing in these cities. Sherrell Dorsey, a black woman who is the founder and president of BLKTECHCLT, a tech hub for innovators of color in Charlotte, has lived and worked in several of the cities on the list. She says these kinds of rankings fail to consider issues such as the lack of access to capital for black women entrepreneurs—and the kind of occupational segregation that pushes black women into less lucrative workforce sectors compared to white men.

“At BLKTECHCLT, we serve a bevy of Black women technologists and entrepreneurs who fight daily for visibility, access, and scalability,” says Dorsey. “Some have entered business ownership as a means to escape harsh discrimination and psychological warfare in the corporate environment.”

Indeed, the stark inequities between white men and black women are felt everywhere in the U.S., and no region feels that worse than the Midwest, where the metros with the largest black women populations consistently show up as among the worst for those women. Pittsburgh and Cleveland duke it out at the bottom of the rankings for health outcomes, educational outcomes, and overall outcomes. The only exception is the ranking for economic outcomes, for which Cleveland is edged out by Milwaukee, with Pittsburgh rounding out the gutter as third worst.

The other Midwest cities that fill out the bottom of the pile for worst economic outcomes—Detroit, Cincinnati, Columbus, Chicago, and St. Louis—all also rank below the median in education and health. The one exception is Columbus, Ohio, which along with Minneapolis is the sole Midwest representative to rank above the median on the health outcome scales. (See CityLab’s related reporting on a health and transportation initiative in Columbus targeted at black mothers and their babies.)

And yet the prospects for black women’s health and prosperity remain the worst across the Midwest, the region that was also deemed the worst to live in for all African Americans in a recent report from the Economic Policy Institute. While Pittsburgh ranks among the lowest for black women’s life chances in our rankings, it is not considered a Midwest city. Yet it aligns better socioeconomically with the Midwest than it does with its neighbors to the east in Pennsylvania such as Harrisburg and Philadelphia. As the EPI report, released in October, explains:

We trace the origins of racial inequality in the Midwest to the deep imprint of racial segregation, which concentrated the regions’ African American population in relatively few urban counties—and then erected a forbidding architecture of residential segregation within those urban settings. In turn, the historical arc of economic opportunity saw African Americans flock to new opportunities in the industrializing Midwest in the middle years of the last century, and then be disproportionately hit by the de-industrialization that followed.

For the most part, the South is paramount for black women’s chances at upward mobility. There were more black women mayors recently elected than ever before in U.S. history, most of them in southern cities, including Vi Lyles in Charlotte, Muriel Bowser in Washington, D.C., Keisha Lance Bottoms in Atlanta, and Latoya Cantrell for New Orleans. Meanwhile, several black women in metro Atlanta have even been in the business of starting their own cities. An encouraging sign for the Midwest is that Chicago elected its first black woman mayor in the city’s history.

And yet, as Dorsey points out, we don’t know how much better black women could be doing if they had the same access to capital as their white counterparts. Despite the growth in the number of companies owned by black women, the gap between the average revenues for those businesses and the average revenues for all women-owned businesses is $24,700 to $143,400—the largest gap of any race. This is but one part of the unfinished business of race and gender inequity, and no metro can lay claim to a solution, says Dorsey, who tracks black entrepreneur trends in the tech sector in her wildly popular newsletter, The Plug,

“Numbers are a start but they don’t address root challenges in southern societies that prioritize white males above all else and demonize Black women, particularly those who may be single mothers,” says Dorsey. “There are very few safe spaces for Black women to exist in public—anywhere.”